The making of the movie 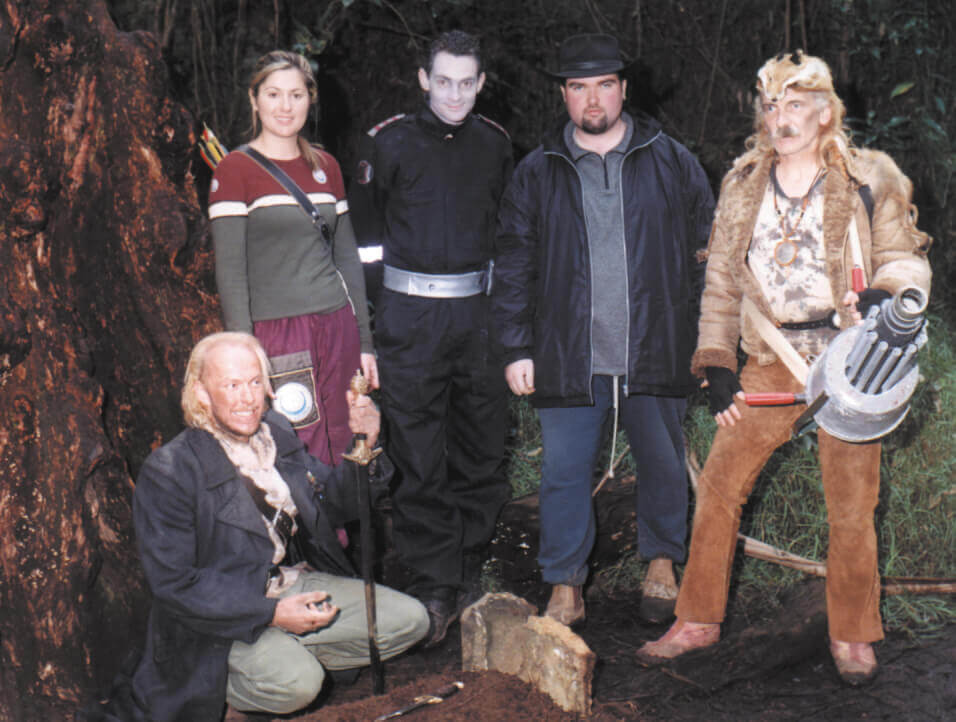 In the early months of 1999, as a first time Director, I teamed up with Writer, Chris Daniels to embark on the epic journey that would become Lost: Black Earth.

Like the world we were creating, chaos seemed to rule and hope was thin. But somehow, we rose to the challenge armed only with great ideas, good intentions, a little spare change, a defiance of failure, an absolute commitment to succeed and not a clue between us.

Finding ourselves $24,990,000 short of the $25million budget needed to make our movie, we realised at this point, that Cameron Diaz as the lead actres was no longer an option.

So the search began for a volunteer cast and crew that would be willing to commit themselves (in more ways than one) to the project. The word spread quickly and much to our surprise, people came out of the woodwork, anxious to be enslaved into the ‘Black Earth’ army.

A spectrum of over fifty people came together to complete the crew, ranging from industry professionals like the ‘Stunts Unlimited’ team, to those experiencing their first time on a movie set. We even had a student masseuse who wanted to practice on the cast and crew between takes.

In spite of the small budget, the enthusiastic dedication from our newly formed ‘Lost’ family compelled us to approach the production from the highest possible professional standard.

So production began in earnest. As the production budget was ‘so enormous’, most of the cast and crew, still had to work in the ‘Universe of Mundane’ to pay the bills, feed the family and keep the cars running etc. Only to volunteer their entire forty-eight hour weekends, with boundless enthusiasm, commitment and loyalty to the exciting ‘Lost World’.

In all, thirty-two days of production shot over a five-month period in over twenty different locations around Victoria, Australia, took place with only one day being rained out. An irony in itself, as I wanted the whole feel of the movie to be shrouded in rain. A major factor in my decision to shoot in the winter.

However, the entire length of production was magical, a mix of skilled, not skilled, and eager people working together, performing amazing tricks, incredible tasks and small miracles on every shoot. Why?…because we loved it!

A director’s secret spell, a sacred chant or a clever bluff? No one was quite sure. They simply came to know my often quoted phrase as a quick response to an inability for the crew to crawl inside my head and see the vision I had carefully constructed of my perceived special effects shots, that I knew I would create in post-production editing... Maybe. The comment was essentially to speed things along on the day of actual shooting.

Post-production actually began…eighteen months later. I had to finish all his ‘Day jobs’ still pending. Mostly editing other people’s projects, before being freed up enough to cope with the enormous task of editing, special effects art & design, sound production etc. All required to turn the raw footage of a bunch of clowns pretending to be trekking across a hostile landscape, chased by monsters and aliens, into the real world of the ‘lost’ heroes of the Black Earth.

The huge crew of over fifty suddenly was cut to three primary post-production crew, Colin Paxman, Chris Daniels and myself.

The bulk of this ‘dinocollosomongous’ task fell on my shoulders, as both the most qualified editor on the team and the owner of the only editing suite.

Colin and Chris supported with their own specialist skills-sets and talents in areas including; model making, graphic art and design, sound design and recording, as well as just ‘being there’ to save me from being sucked into some other unknown dimension of insanity where I was in danger of becoming ‘one’ with the computer.

Matt Farrugia was finally convinced, after two long years of trying, to come on board as the ‘Lost Music Composer’ producing nearly the entire soundtrack at his home studio.

Needless to say, we all survived, even though re-creating every single tiny sound in the movie, from actors dialogue, to footsteps in the sand, almost saw us plunged into an abyss so dark and deep, it is likely we would've been ‘lost’ forever!

However, on New Years Eve 2003, I emerged back into the world, proudly holding up a completed project, only to find myself back in the town of ‘WhereDoWeGoFromHeresville?’

And so began the journey of getting ‘Lost-Black Earth’ out into the world where it belongs, and you are joining that experience right now… So enjoy the ride!