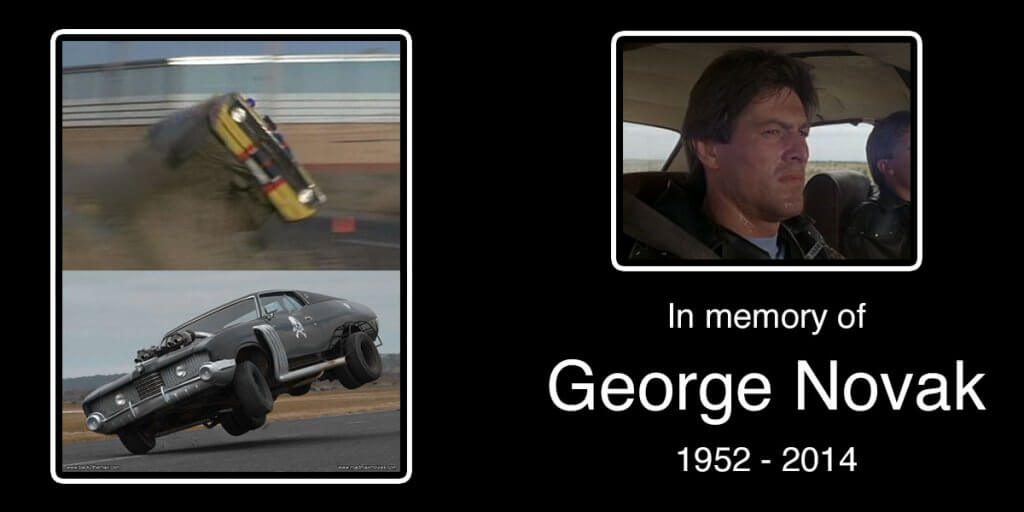 It is with sadness that I have learned of the recent passing of George Novak.

I met George back in 1999 when I was making my first film Lost:Black Earth. He came on board as the Stunt Co-ordinator but brought so much more. With his extensive insight into the film industry, his sense of excitement and adventure, and his constant eagerness to help, the film would be half what it is today without him.

I didn’t know it at the time, but George was quite the legend, having played the character of Scuttle and performed some of the stunts in the classic Australian film Mad Max. He also worked alongside Chuck Norris in Invasion U.S.A., Charles Bronson in Murphy’s Law, Dolph Lundgren in The Punisher, Marlon Brando and Val Kilmer in The Island of Dr. Moreau, Jackie Chan in Mr. Nice Guy as well as plenty of small indy films and dozens of Australian TV show. Most impressively, George ran a stunt school to train up and coming stunt actors as well as performing live stunt driving shows.

I joined him on a trip to one of these shows and in that one day, he taught me more about driving than I’d learned in all the years previous. This would be skills that I still use to this day and have saved me from several potential accidents. One in particular where I’m almost certain I would have lost my life if his training hadn’t kicked in.

George would later introduce me to a number of other filmmakers and I can honestly say, my film career would’ve been very different without his help in those early days. I went on to work with George on a number of projects over years including features, stunt shows and music videos. Somewhere along the way, however, we lost touch with each other as I moved more into the post-production arena and George did less and less work within the film industry. It is now with regret that it has been several years since I last saw him.

I sit here and wonder what went wrong as I have learned that he took his own life. I can’t help but feel that maybe he is in a better place. George was an old-school stunt-man from an era now gone. He drank whisky, seduced women, and flirted with danger at every opportunity. He was that iconic 70’s stuntman and lived it on and off the screen. In today’s world of political correctness, workplace health and safety and digital visual effects, I imagine he was confronted with a world that no longer made sense.

I will always remember George as one of the good guys. One of the very few people in this vulgar industry that I had respect for. The guy who helped get my career going. George, you will be missed. The world is more beige without you in it.

Here’s hoping that the afterlife is filled with tall buildings to jump off, fast cars to crash and women to… Well, I hope you’re having the fun that you clearly lost down here. See you in the next life my friend.