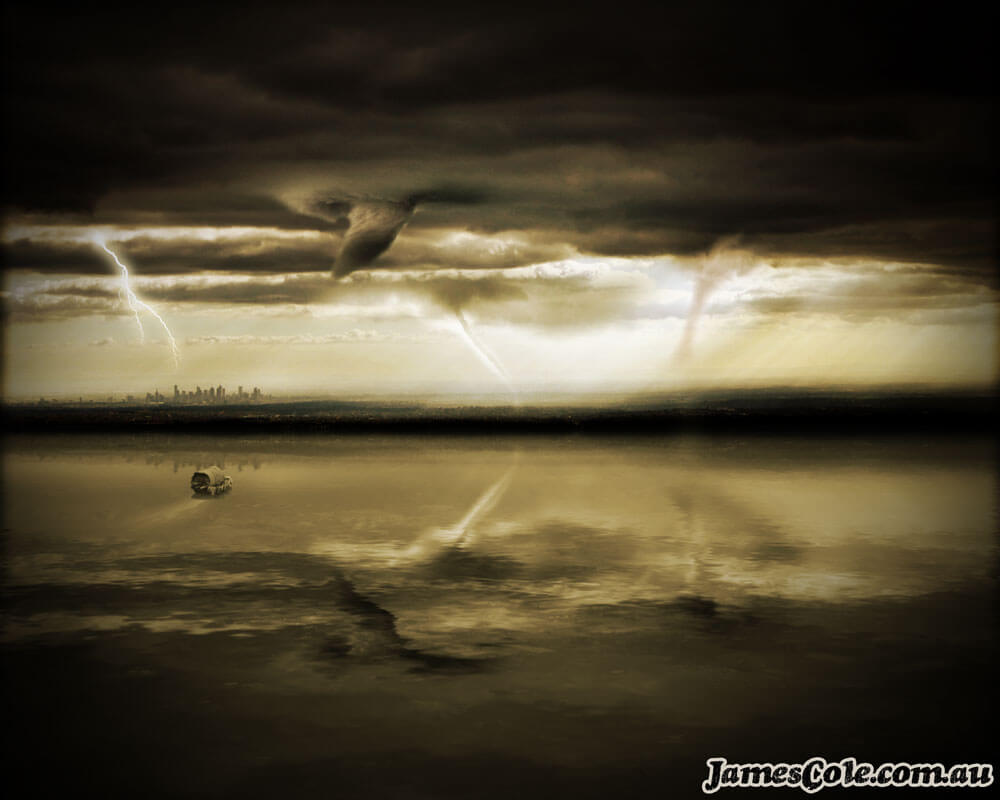 I always love the apocalypse. Post-apocalyptic movies and artwork capture my imagination in ways no other genre does. Maybe it's the concept of returning to a simpler life where all the bullshit of modern society is gone. Maybe it's the idea that every decision made in these worlds is a matter life and death. There is purity and beauty in that. Whatever it is, I am always drawn to creating apocalyptic artwork,

This image began its life as a photo taken from the Sky-High lookout on Mount Dandenong, looking across the suburbs that sprawled out below to Melbourne city in the distant. The first step was to replace the sky with stormy clouds and fill it with tornados and lightning. I used actual photos of tornados to sculpt shots of clouds I had, into tornados.

I always find it fascinating how creating fantasy artwork (or film visual effects for that matter) is able to give you a greater insight into physics and how the world works. We innately know how things look and when they're off, even just a little, it doesn't look right. To create realistic tornados and lightning I had to study them and as a result, gain a greater understanding of them. My lightning has improved over the years but I think it works here.

Once the sky was complete, I flooded the suburbs to create an ocean reflecting the impending doom. The boat was a late addition as I felt the image needed some kind of jeopardy to add drama. It was taken from a stock photo I found.

One thing I love about this image is even with all the chaos that is clearly happening, there is a sense of peacefulness, calm and tranquillity. Once toned with a tobacco sepia tone, it gave a certain melancholy feel. As for the name "Drowning Solitude" it just popped into my head and I couldn't shake it. I still don't really get it. Maybe it's not for me to understand. I often wonder if the boat is named 'Solitude'.