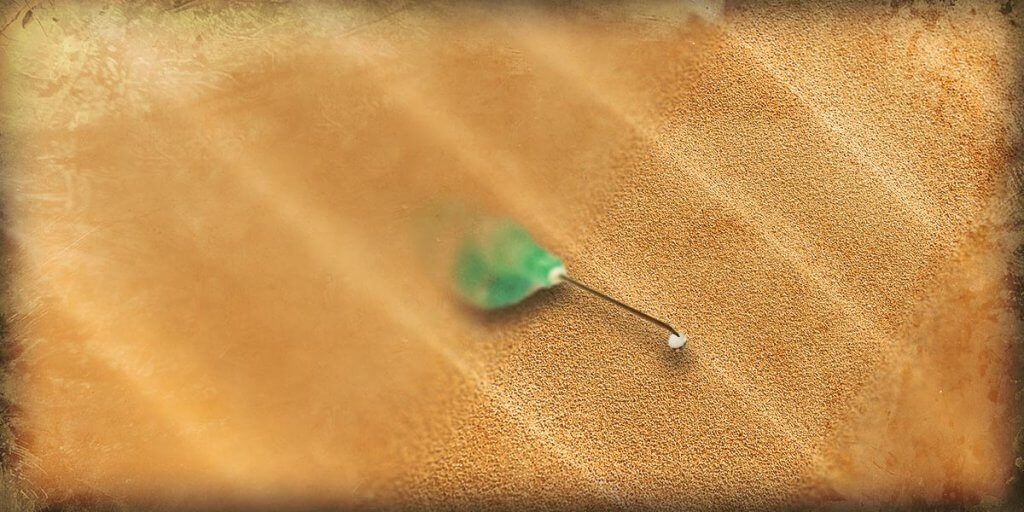 11 pm Christmas night 2016, exactly one year ago as I write this, after a day of feasting and relaxing, I decided to take Saffy, my dog, for a walk on the beach. I sat for a while on a wooden deck in front of one of the beach huts that line Frankston beach. It’s something I’d done many times before, looking out into the darkness of the ocean and contemplating life and the Universe or simply meditating to the sound of the waves and just being.

As it was time to leave, I stood up and felt a stabbing in my foot. At first, I thought it was a piece of dry grass that populated the dune area. I took another step, and as I placed my foot down, I knew it wasn’t grass. As pain shot up my leg, I scrambled for my phone to turn on the torchlight. Looking down I could see the needle sticking out of my foot.

I couldn’t actually tell you what I felt in that moment as numbness encompassed me. The nightmare scenario that “only happened to other people” had happened to me. Calmly I bent down and pulled out the needle. All the times my mother had told me to “make sure you put your shoes on” from my childhood came flooding back to haunt me.

“What the fuck do I do now?” raced into my brain.

I walked back along the beach, dragging Saffy along, who wanted to stop and sniff every half metre, not understanding what had just happened. We got back to the car and I sat for a long moment going over my options. The problem right then was I didn’t know what my options were. I had no idea what to do or how much trouble I was in if, in fact, I was in any trouble at all. My only reference was people having told me not to walk barefoot cause I could step on a needle and that drug addict needles could give me aids. Not a particularly delightful prospect.

So I called emergency hoping they could at least give me some pointers. I didn’t even know if this was something that had to be dealt with as an immediate emergency or not. I have to say, the people at emergency were pretty useless and I hate to think of dealing with them if I had a real life-threatening emergency. It’s like they were robots who could only stick to their scripts and my question of “what should I do?” wasn’t part of that script. They were too concerned with the legalities of “we are not allowed to offer advise” than to actually helping someone in need. Thanks for that lawyers…

After a heated exchange, the humanity beat down the legalities and the lady suggested I call the ‘Nurse on Call‘ service. Something I’d never heard of before. So that’s what I did. The nurse I spoke with was far more helpful and seemed genuinely concerned. I was told to go to a hospital as they could test for hepatitis straight away and issue any drugs if necessary.

Christmas night in hospital was not in my plan for good celebrations. I took Saffy home, made sure she was comfortable and settled, then drove myself to Frankston emergency hospital, where I waited and waited and waited…

With all this time and nothing to do, this is when my brain kicked in and really contemplated what had happened. I could quite possibly have a death sentence and every possible scenario of death and doom filled my thoughts. Of course, in these moments, my brain always goes to the most dramatic possibilities.

At 4 am I finally saw the doctor, who took my blood and explained the process. There were certain things that could be tested immediately, while others, such as HIV, I’d have to get re-tested in 3 months time.

At 7 am the doc came back with the all clear for the first test, gave me a tetanus shot and released me. I made my way home and slipped into a deep unsettled sleep of exhaustion with Saffy curled up beside me.

When I eventually woke up, I made the decision only to tell a handful of people I could trust to keep positive about it. And more importantly, keep me positive about it. The last thing I wanted or needed was to have people feeling sorry for me or having negative thoughts about all the shit that “could” happen. I needed to stay focused on the positive to get through this.

The next three months were so drawn out, It seems ridiculous to me now how quickly the rest of the year has passed. Eventually, the time came to get the blood test and three days later, I sat in my doctor’s office anxiously awaiting the results. This was the first time since waiting in the hospital that negative thoughts started to enter into my mind. Although I knew by now that the chances of contracting something were very slim, I couldn’t get rid of those thought’s I’d avoided for the three long months.

Finally, the doc came into the office and gave me the news that I was all good and in the clear. Holy shit! Even though in my heart I’d known I was clear, to hear it out loud and definitively; I sighed a massive relief.

Since the all clear, I’ve been a little looser with who I’ve told the story to and it’s been interesting to witness the reactions. Almost everyone has reacted in a very similar manner, with a look of disgust glazing over their eyes, followed by comments such as “those fucking junky arseholes”. Only a few people reacted with concern for my wellbeing over any judgement of the one responsible for leaving the needle on the beach. I found this reaction fascinating.

I can honestly say at no point in this experience did I ever feel any anger, resentment or disgust towards the person that had left the needle on the beach. In fact, quite the opposite. I felt compassion. I remember clearly as I sat in my car before I called emergency, having the thought of how much pain must they have been in to be doing these drugs in the first place. To be so caught up in their own need for numbification that there is no consideration for others wellbeing in this place where children could potentially play.

You see It was only a few days before that I had watched a video online talking about addiction and it used the example of how soldiers that go to war often start using drugs such as heroin to deal with what they are going through. For many, it becomes a daily need, what would be classified as an addiction. Yet it was observed for many when they returned to their homes and reconnected with friends and family, they simply stopped using with none of the effects we often associate with quitting drugs.

It was found that the ones that continued with their addiction, returned to a life that was still void of connection such as no family, friends or support network. It turns out that for the most part, taking the drugs was a form of dealing with a lack of connection in ones life and once those connections were returned, the need for drugs simply disappeared.

So in my own moment of facing potential mortality, all I could think about was how our society has become more and more a place without the human connection we all need. Connections on social media don’t count. Nothing can compare to the face to face interactions between the human energy fields. Human connection is not some whacky bullshit spiritual new age nonsense, its an essential part of existence that we all have. It is a fundamental need as much as the oxygen we breathe.

So maybe when next time you see someone in trouble, maybe a hobo on the streets or someone addicted to drugs or alcohol or anything, instead of rejecting them, maybe have a think about how you can increase connection in their lives. Addiction of any kind is not something the addicts have to overcome alone. In fact, it simply wouldn’t be possible. It is something all of us as a society have to work together on. We are all part of this problem and we must all be part of the solution. Let us all change the way we look at addiction. To outcast and vilify those with addictions is simply adding fuel to the fire. The very fuel they need to remain addicts.

How can you deepen a connection with someone suffering today?