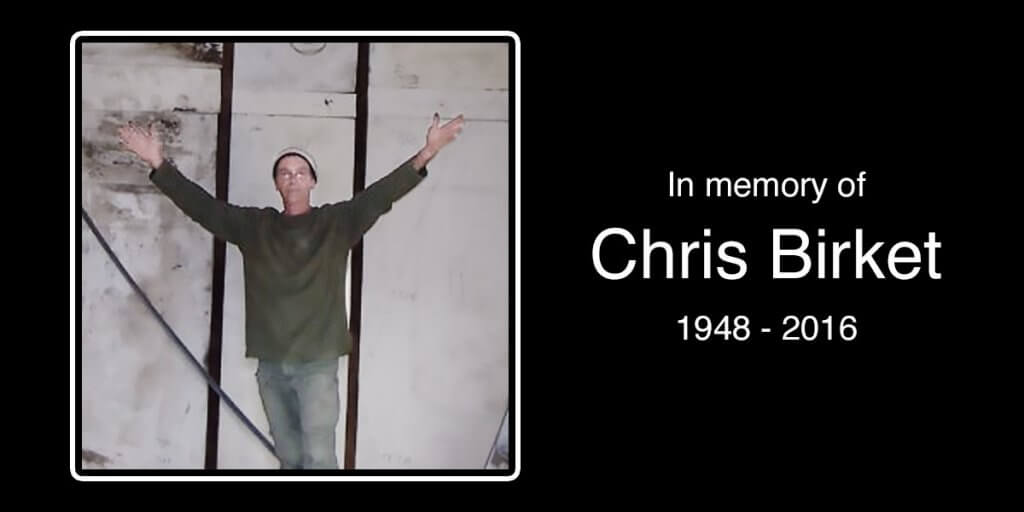 Three days ago I got the sad news that Chris Birkett had passed away. Although I hadn’t seen Chris in about ten years, we had spoken on the phone a few times and I always considered him a friend. Simply put, life got in the way.

I met Chris at the very beginning of my film career while he was working at Act 3 animation studios. Looking to get into visual effects, a mutual friend introduced us and thought he may be able to point me in the right direction. I have to say, meeting an immaculately suited man in a cutting-edge animation facility at that time was somewhat intimidating and nerve-racking, to say the least. Yet what I soon realised was Chris was a kind man with a gentle and extremely generous nature. He showed me around, introduced me to people I have no memory of today and we talked about films for quite a while.

A few years later, having stayed in touch with Chris, I asked if he’d be interested in helping out with a small indy feature film I was making called Lost:Black Earth. I hoped he’d spend a few hours with me, give me some pointers and maybe a bit of advice along the way. What I didn’t expect, was for him to get excited at the idea and want a bigger role in the production. He came on board as the Production Manager and I can honestly say, without his guidance and brilliant organisational skills, I don’t think the movie would’ve gotten finished. Not that any of the rest of the cast or crew really knew of him or his brilliance as I don’t recall him actually coming to set. Throughout the whole process, his guidance was present and he was one of only a few who stuck with me to the end, a four-year-long journey.

One memory I hold dearly is that every time I would visit Chris and his partner, Jude, I would always get a chance to play their piano. I use the term “play” loosely. Sometimes, I’d sit for an hour or more while they would be preparing dinner, just tinkering and making tunes. Not once did either Chris or Jude comment on how bad it must’ve sounded. They would just indulge my love for the piano and music and making sounds.

After that, we became quite close friends and a few years down the track we were both helping out and giving our time and advice to other newbies wanting to make films. I learned a lot from Chris, about generosity, giving and having a sense of zen about everything (although that one took quite a while before I realised it).

One day back in 2001 Chris came to me with a song he’d written and proposed working on it together. He came over to my studio and we spent a day recording and playing with sounds and experimenting with crazy ideas. It was definitely one of the most fun days of creativity I’ve had. The song is no chart-topper, but we had a lot of fun making it. Even my mum got a cameo as an appalled parent 😀

It was also from Chris that I learned how to exit the film industry and have a life beyond the chaos, constant negativity and drama. Although at the time he did, I couldn’t understand why anyone would want to and his leaving to become a chef, baffled me. Over the years we drifted apart as life took us in different directions.

I’m happy to say that we got to speak on the phone about a year ago. He told me that he’d found a box of memorabilia from Lost, the movie we had made together and asked if I’d like it. Of course, I said yes. He also told me there was a surprise waiting for me when I picked it up. It seems it wasn’t meant to be. We tried organising a time to catch up several times over the year to no prevail. I guess I’ll never know what that surprise was now.

Chris, you were one of the kindest, gentlest souls I ever met and you will be missed, my friend.

Posted in Friends Lost and tagged animation, chris birkett, death, film, gentle, honour, kindness, life, loss, production
← What have you learned in the last twelve monthsWritings from a lost era… →